Neuroleptic malignant syndrome: Don't let your guard down yet

To help you protect your patients receiving SGAs, this article explains how to:
• identify those at risk
•  recognize the different NMS presentations associated with each SGA
• continue antipsychotic treatment for a patient with a history of NMS.

CASE STUDY: A drug-induced disorder
Mrs. Z, age 39, has a history of multiple hospitalizations for schizoaffective disorder complicated by poor compliance and a history of benzodiazepine abuse. This time she was admitted with increased auditory hallucinations and paranoid delusions of her family trying to poison her. Despite multiple haloperidol injections (5 mg IM q4h prn), Mrs. Z continued to have hallucinations and remained agitated.

Haloperidol was discontinued and ziprasidone (20 mg IM q4h prn) was started. After 3 days, Mrs. Z became less agitated and had fewer hallucinations. The IM route was discontinued and oral ziprasidone was started at 40 mg bid, then titrated to 80 mg bid after 2 days. On the third day after titration, Mrs. Z fell twice. She hit her head in one fall, but a brain CT to rule out bleeding was normal.

The next day, Mrs. Z became more confused and developed fever, tremor, urinary incontinence, and a severe headache. She became obtunded, was intubated, and was transferred to the intensive care unit of a tertiary care center.

Clinical manifestations of NMS range from typical—as defined by the DSM-IV-TR
(Table 1)2,3—to atypical, without:
•  fever4
• rigidity5
• CPK elevation.

Many conditions resemble NMS (Table 2). Because NMS can be fatal without emergent diagnosis and treatment, maintain a high index of suspicion for this condition whenever you prescribe antipsychotics.

NMS is believed to be caused by reduced dopamine activity in the brain associated with dopamine antagonists, interruptions in nigrostriatal dopamine pathways, or withdrawal of dopaminergic medications.3 However, dopamine D2 receptor blocking potential is not directly linked to the occurrence of NMS.6 Other mechanisms include genetic susceptibility and different CNS neurotransmitter disturbances.7

NMS develops in an estimated 0.02% to 2.5% of patients treated with antipsychotics.8-10 The syndrome appears to occur slightly less frequently with SGAs than with FGAs.6,10

Risk factors. NMS can develop at any age, in men and women, and in patients with psychiatric or medical illness.11,12 In addition to antipsychotics, other medications—including antiemetics and sedatives—can cause NMS. The syndrome has been triggered when Parkinson’s disease patients stop taking or reduce the dose of a dopamine agonist or switch from 1 dopamine agonist to another.13,14

Symptoms usually develop during the first 2 weeks of pharmacotherapy but may start after the initial dose or during long-term stable therapy.15 Although some studies found NMS development to be dose-independent, multiple cases have demonstrated an association with dose changes. Death occurs from dysautonomic manifestations and systemic complications.

An elevated risk for NMS may exist in patients with:
• mood disorders
• preexisting catatonia16
• complicated medical and neurologic disorders, such as encephalitis or mental retardation17
• poor functional and physiologic status3• concurrent lithium treatment
• IM injection of an antipsychotic
• use of a high-potency antipsychotic, such as haloperidol
• psychomotor agitation.

We reviewed 88 reports of NMS cases associated with 6 SGAs: olanzapine, clozapine, risperidone, ziprasidone, quetiapine, and aripiprazole. In this article, we cite representative cases only; readers interested in the full literature search can find this evidence and its references in the Case Reports Table.

NMS cases were fairly evenly distributed across all age groups (Figure 1). SGAs were implicated in NMS when used as monotherapy in 9 cases (10%) and in combination with other psychotropics in 41 cases (47%). We could not find medication regimen data for 38 cases (43%).
Our review suggests that a history of NMS is a risk factor for developing another episode. Twenty cases showed a clear history of NMS, and 2 cases reported 3 different NMS episodes in each patient.19,21
In the cases we reviewed, NMS developed more often among men than women (Figure 2). The reason is not clear. One hypothesis suggests that men are more likely to present with severe agitation that requires aggressive antipsychotic treatment.14,22
Previous reports suggested that parenteral antipsychotic administration might increase NMS risk. Most NMS cases in our review involved oral administration, perhaps because parenteral SGAs have become available only recently. In the future, increased use of parenteral SGAs might increase the incidence of NMS.
The NMS mortality rate associated with SGAs was lower than that linked to FGAs.6 This finding, however, may be influenced by increasing awareness of NMS among physicians, resulting in earlier diagnosis and treatment.6 F

Incidence is dispersed fairly evenly; elderly patients may be less likely to be prescribed an antipsychotic than other age groups.
Source: Reference 5 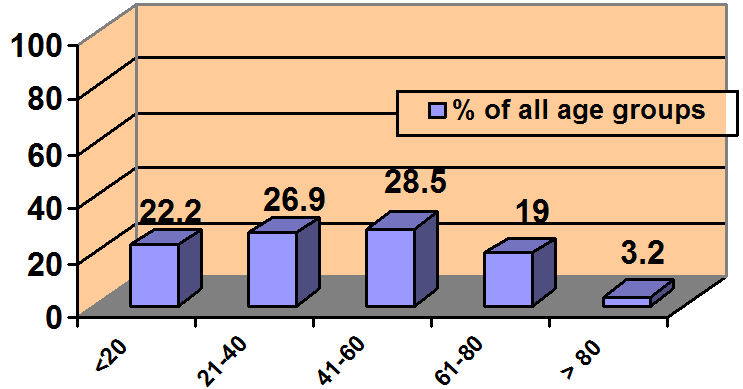 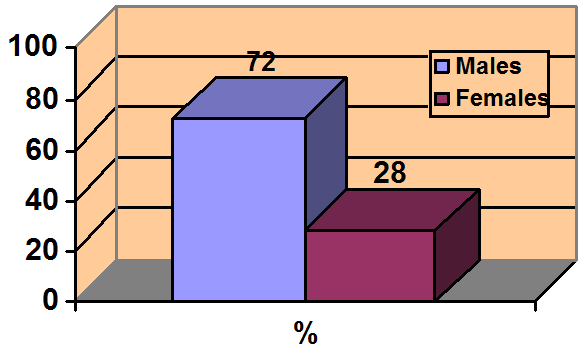 Men may be at higher risk because they are more likely to present with severe agitation and receive larger doses of potent antipsychotics.
Source: References 14,22

Aripiprazole. Because aripiprazole is the newest SGA, data on its association with NMS are limited. Our review looked at 2 cases. Both patients had atypical NMS features, including absence of fever and mild CPK elevation. In 1 case, aripiprazole was used to treat agitation in a 13-year-old girl with history of NMS. This resulted in a mild increase in tachycardia and brief worsening of serum CPK but did not significantly affect temperature, respiratory rate, or blood pressure.

Clozapine. Several NMS cases have been connected to clozapine monotherapy (6 cases) or combination therapy (22 cases). Compared with NMS caused by other antipsychotics, clozapine-induced NMS occurred sooner after patients started the drug or restarted it after discontinuation. NMS has developed in patients receiving chronic steady doses of clozapine, after dosage increases, and after other medications have been added.

Clozapine-treated patients need to be closely monitored for agranulocytosis symptoms, so any other adverse effects—such as initial symptoms of NMS—likely will be detected early. Some reports suggested that clozapine-induced NMS may feature fewer extrapyramidal side effects and a lower-than-typical increase in CPK. In the cases we reviewed, however, NMS presentations ranged from typical—with a highly elevated CPK—to mild with no rigidity and mild or no CPK elevation. Two of 28 cases reported neurologic sequelae, including severe truncal ataxia and dysmetria.

Clozapine has been used to treat patients with a history of NMS who experience psychotic relapse. In several cases, however, NMS recurred after clozapine was started. In 1 case, a third rechallenge with slow titration of clozapine was successful.

Olanzapine. Some studies have found olanzapine-induced NMS to be rare (rate ≤0.01%), but our review found 36 such cases. Ten patients (30%) had a history of NMS. Olanzapine dosing did not correlate with NMS—in 11 cases NMS occurred with daily doses ≤10 mg.

As with clozapine, the presentation of olanzapine-induced NMS varies widely. Onset from within 8 hours of starting olanzapine to after 2½ years of stable olanzapine dosing has been reported. Some cases have featured a typical NMS presentation. Atypical presentations have included:

Olanzapine challenge for patients with a history of NMS often has triggered recurring NMS.
Quetiapine. NMS has been reported in patients receiving quetiapine monotherapy and combination therapy. Patients who previously experienced NMS after taking an FGA have developed quetiapine-induced NMS, as have some with a history of Lewy body disease. Two patients treated with quetiapine developed CPK elevations to almost 9,000 U/L (normal
Risperidone. NMS among patients taking risperidone occurs more frequently in those with history of NMS or who restart risperidone after discontinuation. Time to NMS occurrence after starting risperidone varies from hours to months. Atypical presentations include delayed fever, delayed muscle rigidity, massive intestinal bleeding, massive CPK elevation (such as 46,420 U/L), and hyponatremia instead of hypernatremia.

Ziprasidone. Administering IM ziprasidone or combining any form of the drug with other psychotropics increases NMS risk. Although most cases featured typical presentations, 1 case reported absence of muscle rigidity, which is present in >90% of patients with NMS associated with FGAs.

Why some patients develop sequelae after NMS while others recover is unknown. Sustained hyperpyrexia, preexisting medical or neurologic disorders, polypharmacy, prolonged courses, and delayed diagnosis may play a role.25-27

CASE CONTINUED: A complicated illness
Mrs. Z was diagnosed with NMS. Ziprasidone was discontinued, and supportive treatment, bromocriptine (2.5 mg po qid), and lorazepam (2 mg IV qid) were started. Temperatures of 101° to 103° F (38.3° to 39.4° C) persisted for the next 2 days. This hyperthermia was difficult to control because of suspected meningitis.

Recognizing NMS signs is the first and most important step to quick diagnosis and early medical intervention. Recommendations for medical treatment of NMS vary widely, but most stress stopping the triggering drug and initiating supportive care (Table 3).27-29

Several medications have been used off-label to treat NMS based on anecdotal clinical reports. Benzodiazepines such as parenteral lorazepam, 1 to 2 mg every 6 to 8 hours, have been used to treat catatonic symptoms.30 Dopamine agonists—including bromocriptine, 2.5 mg every 8 hours—have reduced the duration and mortality of NMS but have the potential to worsen psychotic symptoms and cause hypotension and emesis.30

Table 3
Treating NMS: Where to start

CASE CONTINUED: Resuming antipsychotic Tx
Five days after intubation, Mrs. Z started to improve and was extubated successfully. However, she developed severe truncal ataxia, upper extremity tremors (resting and intentional), athetosis, hemiballismus, dysmetria, and dystonia. She continued to experience hallucinations after transfer back to the psychiatric floor.
Oral olanzapine challenge was started at 2.5 mg/d and titrated up to 10 mg/d over the next 7 days. Her psychotic symptoms showed mild improvement but her ataxic movements worsened and she fell frequently. Benztropine, 1 mg po bid, was added to her regimen and helped with the tremor. She was transferred for rehabilitation and eventually discharged home.

IF A PATIENT NEEDS ANTIPSYCHOTICS

If a patient who has experienced NMS continues to need pharmacotherapy for psychosis, wait 1 or 2 weeks after NMS symptoms resolve before restarting any antipsychotic.31 Although most patients can be treated safely with an antipsychotic after having NMS, clearly document the indications and your discussions with the patients and their families.

No conclusive evidence indicates which antipsychotic might lower a patient’s risk of recurrent NMS. Using an FGA in patients who recover from NMS carries a 30% risk of recurrent episodes.3 Data on the recurrence of NMS with SGAs are inconclusive. No relationship was found between relapse rate and patients’ age or sex.32
Regardless of which drug you choose, start with a low dosage and titrate slowly. You also can protect patients by reducing risk factors for NMS, such as dehydration, and considering alternate therapies such as electroconvulsive therapy, when appropriate.

The authors report no financial relationship with any company whose products are mentioned in this article, or with manufacturers of competing products.