Diagnosis and treatment of neuroleptic malignant syndrome (NMS) are controversial because this potentially life-threatening syndrome is rare and its presentation varies. These factors make it difficult to evaluate treatments in controlled clinical trials, and data about the relative efficacy of specific interventions are scarce. It may be possible, however, to develop rational treatment guidelines using empiric clinical data.1,2

This article examines the evidence related to 6 controversial aspects of NMS diagnosis and treatment:
• most-reliable risk factors
• NMS as a spectrum disorder
• what causes NMS
• NMS triggered by first-generation vs second-generation antipsychotics
• first-line interventions
• restarting antipsychotics after an NMS episode.

1. ARE THERE RELIABLE RISK FACTORS FOR NMS?

Preliminary studies also have implicated dopamine receptor abnormalities caused by genetic polymorphisms or effects of low serum iron.1,7,8 Pharmacologic studies have suggested that higher doses, rapid titration, and IM injections of antipsychotics are associated with increased NMS risk.3,5 Some studies suggest that 15% to 20% of NMS patients have a history of NMS episodes.1,2 In addition, high-potency first-generation antipsychotics (FGAs)— especially haloperidol—are assumed to carry higher risk than low-potency drugs and second-generation antipsychotics (SGAs), although this hypothesis remains difficult to prove.9-11

These risk factors, however, are not practical for estimating NMS risk in a given patient because they are relatively common compared with the low risk of NMS occurrence. For the vast majority of patients with psychotic symptoms, the benefits of properly indicated antipsychotic pharmacotherapy will outweigh the risks.

* For individual patients, these common risk factors must be weighed again the benefits of antipsychotic therapy

2. IS NMS RELATED TO PARKINSONISM, CATATONIA, OR MALIGNANT HYPERTHERMIA?

Parkinsonism. Some researchers have described NMS as an extreme parkinsonian crisis resulting from overwhelming blockade of dopamine pathways in the brain.1,2,12 In this view, NMS resembles the parkinsonian-hyperthermia syndrome that can occur in Parkinson’s disease patients following abrupt discontinuation or loss of efficacy of dopaminergic therapy, which can be treated by reinstituting dopaminergic agents.13 Evidence to support this view includes:
• Parkinsonian signs are a cardinal feature of NMS.
• Withdrawal of dopamine agonists precipitates the syndrome.
• All triggering drugs are dopamine receptor antagonists.
• Risk of NMS correlates with drugs’ dopamine receptor affinity.
• Dopaminergic agonists may be an effective treatment.
• Lesions in dopaminergic pathways produce a similar syndrome.
• Patients with NMS have demonstrated low cerebrospinal fluid concentrations of the dopamine metabolite homovanillic acid.14

Catatonia. Fink et al15 and others16-18 have persuasively argued that NMS represents a form of drug-induced malignant catatonia. Evidence supporting this includes:
• The 2 disorders share neuropsychiatric symptoms.
• Catatonic signs are common in NMS.19
• Malignant catatonia and NMS share physiologic and laboratory signs.20
• Reintroduction of antipsychotics can acutely worsen both conditions.
• Benzodiazepines and electroconvulsive therapy (ECT) are effective treatments for both disorders.15-18

Lee21 examined the relationship between catatonic features and treatment response in 14 NMS patients. Most patients with catatonic symptoms responded to benzodiazepines, whereas none of those did who had an extrapyramidal-hyperthermic presentation without catatonia. Lee concluded that NMS is heterogeneous and may occur in catatonic and noncatatonic forms that differ in treatment response.

3. WHAT IS THE PATHOPHYSIOLOGY OF NMS?

NMS pathophysiology is complex and likely involves interplay between multiple central and systemic pathways and neurotransmitters. As described above, compelling evidence suggests that dopamine blockade plays a central role.12
Dopamine blockade in the hypothalamus is believed to contribute to thermo-regulatory failure, and blockade in the nigrostriatal system likely contributes to muscle rigidity and hypermetabolism. The loss of dopaminergic input to the anterior cingulate-medial orbitofrontal circuit and the lateral orbitofrontal circuit likely contributes to the mental status changes and catatonic features seen in NMS. 12

Some researchers have proposed competing or complementary hypotheses, however. For example, Gurrera 23 proposed that patients who are prone to developing NMS have a vulnerability to a hyperactive and dysregulated sympathetic nervous system, and this trait—together with dopamine system disruption induced by dopamine-blocking agents— produces NMS. Other investigators have implicated serotonin, norepinephrine, gamma-aminobutyric acid and glutaminergic mechanisms. 1,12,24,25

4. ARE FGAS OR SGAS MORE LIKELY TO CAUSE NMS? 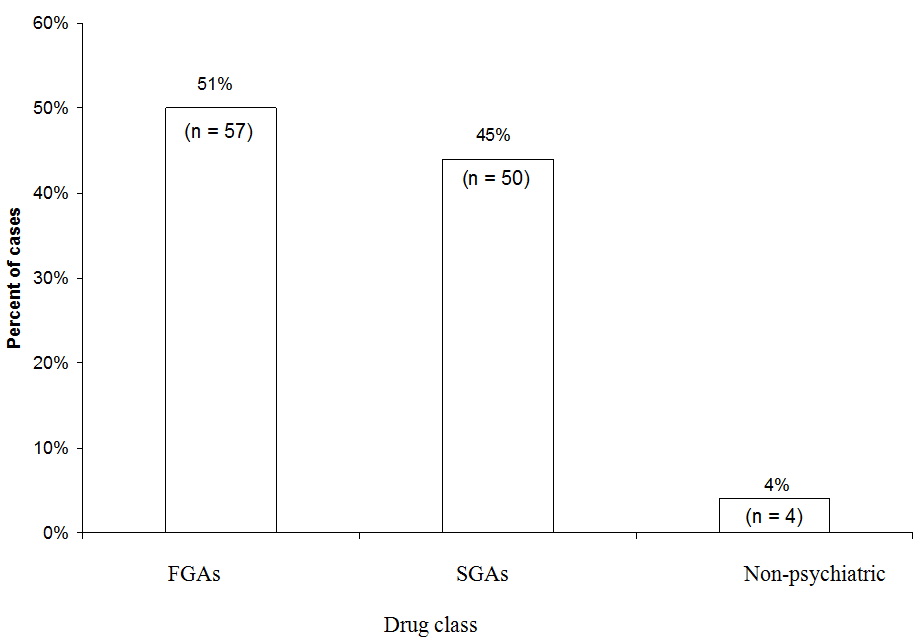 Slightly more NMS cases were attributed to FGAs (51%) than SGAs (45%) in an analysis of 111 cases of probable or definite NMS associated with a single drug reported to the NMS Hotline from 1997 to 2006. The FGA haloperidol accounted for 44% of all cases. “Medical” refers to cases in which a neuroleptic was used in a non-psychiatric setting.

NMS is assumed to occur less frequently in patients treated with SGAs than in those receiving FGAs, although this hypothesis is unproven. Isolated reports of NMS have been associated with nearly every SGA.9-11 It is difficult to prove FGA vs SGA liabilities because:

• NMS is rare.
• Dosing practices may be more conservative now than in the past.
• Most clinicians are aware of the early signs of NMS.

In an epidemiological study of a large database, Stubner et al 26 found that patients receiving SGAs had a lower risk of NMS than those treated with haloperidol. 26 In this study, the overall rate of NMS was 0.02%.

NMS hotline data. We recently examined which medication classes were implicated in 111 NMS cases reported to the Neuroleptic Malignant Syndrome Information Service hotline (1-888-NMSTEMP) between 1997 and 2006 (Figure). We included only cases of definite or probable NMS (as diagnosed by hotline consultants) in which a single antipsychotic was administered. Slightly more cases were attributed to FGAs (51%) than SGAs (45%). The remaining cases were attributed to neuroleptics used in medical settings (such as promethazine or prochlorperazine).

Because they are now prescribed less often, FGAs accounted for a disproportionate number of NMS cases reported to the hotline. Haloperidol accounted for the majority of FGA cases and 44% of all cases. If we had excluded haloperidol and compared the NMS risk of SGAs to only intermediate- or low-potency FGAs, the relative advantage of SGAs would have been lost. On the other hand, it is clear that SGAs still carry a risk for NMS.

Analyses suggest that the SGA-associated classic features of NMS—fever, muscle rigidity, and autonomic and mental status changes—are retained in patients receiving SGAs, although some may not develop the severe rigidity and extreme temperatures common in patients receiving FGAs.9-11 The milder clinical characteristics associated with SGAs may reflect more conservative prescribing patterns or increased awareness and earlier recognition of NMS, which would prevent fulminant presentations.

5. WHAT IS THE EVIDENCE FOR SPECIFIC NMS TREATMENTS?

NMS is rare, its presentation varies, and its progression is unpredictable. These factors make it difficult to evaluate treatments in controlled clinical trials, and data about the relative efficacy of specific interventions are scarce.
Even so, the notion that NMS represents an extreme variant of drug-induced parkinsonism or catatonia suggests that specific NMS treatments could be based on symptom severity or stage of presentation. We propose a treatment guideline based on theoretical mechanisms and anecdotal data.2,27-29

Support. After immediate withdrawal of the offending medication, supportive therapy is the cornerstone of NMS treatment.1,2,27
For patients presenting with mild signs and symptoms, supportive care and careful clinical monitoring may be sufficient. Extreme hyperthermia demands volume resuscitation and cooling measures, intensive medical care, and careful monitoring for complications.

Treatment. Despite a lack of consensus on drug treatments for uncomplicated NMS, approximately 40% of patients with acute NMS receive pharmacologic treatments.2
Lorazepam, 1 to 2 mg parenterally, is a reasonable first-line therapy for NMS, especially in individuals with catatonic features.4,15-18,21,30,31 Some investigators recommend higher doses.15 Benzodiazepines are preferred if sedation is required in agitated NMS patients.4,15-18
Dopaminergic agents such as bromocriptine and amantadine enhance dopaminergic transmission to reverse parkinsonian symptoms and have been reported to reduce time to recovery and halve mortality rates when used alone or in conjunction with other treatments.13,27,32,33 Rapid discontinuation of these agents can result in rebound symptoms, although this may be true for any specific drug treatment of NMS.1,31,32

Dantrolene uncouples excitation-contraction coupling by enhancing calcium sequestration in sarcoplasmic reticulum in skeletal muscle and has been used to treat NMS hypermetabolic symptoms. Some reviews found improvement in up to 80% of NMS patients treated with dantrolene monotherapy.27,32-35 Compared with supportive care, time to recovery may be reduced—and mortality decreased by almost one-half—when dantrolene is used alone or in combination with other medications.

Not all case reports have shown that dantrolene, benzodiazepines, or dopaminergic agonists are effective in treating NMS.31,36 In our opinion, only advanced NMS cases—with extreme temperature elevations, severe rigidity, and evidence of systemic hypermetabolism—benefit from dantrolene treatment.1,2
ECT has been used successfully to reduce mortality from NMS and other catatonic-spectrum disorders. It is usually employed after supportive therapy and psychopharmacologic interventions fail.2,15,16,27,37 ECT for acute NMS typically consists of a series of 6 to 10 treatments with bilateral electrode placement. Daily ECT may be needed initially.15

The rate of NMS recurrence on retreatment with an antipsychotic has varied.38 We estimate that up to 30% of patients may be at risk of NMS recurrence when rechallenged with an antipsychotic.1 By following proper precautions (Table 2), however, you can safely treat most patients who require continued antipsychotic therapy.1,2
When you restart treatment, a lower-potency antipsychotic from a different chemical class may be a safer option than retrying the triggering agent, according to retrospective analyses of limited available data. A patient who develops NMS on a FGA might benefit from an SGA trial, although some risk of recurrence remains.1,10