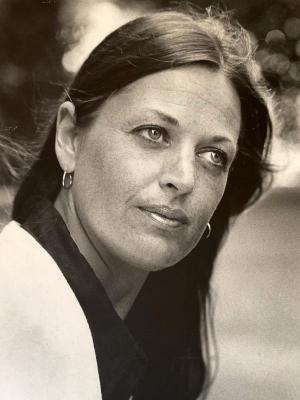 Suellen Gallamore, beloved wife, mother, grandmother and friend of many folks across this great land, passed away peacefully at home on the morning of Tuesday, Jan. 26, 2021, of complications due to Idiopathic Pulmonary Fibrosis. She was surrounded by her husband Robert, her sons Scott and Greg, wonderful daughter-in-law Beth, and her grandsons Cole, Harrison and Will, with her puppy dog resting on her lap, as she wanted.

Suellen was born in 1943 to Blondina Ellison Long and Paul Robinson Long, in Middletown, Ohio, while her father was away on active duty as a lieutenant and tank commander in the U.S. Army 3rd Armored Division. Paul landed on Utah Beach two weeks after the D-Day invasion, and fought in the Battle of Northern France and the Battle of the Bulge. He also served unofficially as the division’s piano entertainer, passing his keyboard and vocal talents on to baby Sue, who took piano lessons as a child, and inherited her father’s ear for music. Hum a tune, and she could play it.

In her high school years at Wayne Township High School in Dayton, Ohio, Suellen served as organist for her family’s Methodist church. With her alto voice, ear for harmony, and ability to read music, she sang in several church choirs and the Nebraska Choral Arts Society (NCAS). A natural party hostess, she held the choral group’s annual Christmas social gathering at her fine Tudor home, where on one occasion, well-known British choral master Sir David Wilcox entertained the gathering by playing her Steinway - Mozart style, upside down and backwards. With the whole NCAS ensemble, and the Maestro’s presence, you have never heard such glorious music lifting from a private home.

Suellen attended her father’s alma matter, Miami University of Ohio, in Oxford. She was charming and quick with a quip, never forgot a face nor detail of a special event, and, eschewing maps, Sue could find her way anywhere she had been before. Her personal physician told her family at her death that Sue was one of the sharpest women she had ever met.

That innate intelligence, plus her drive to help others, was put to remarkable public service. Although a layperson medically, when her first cousin slipped on an icy Chicago sidewalk and severely injured an ankle that required surgical reduction - subsequently dying  of a reaction to inhalational anesthesia - Suellen learned everything she could about the rare hereditary condition called Malignant Hyperthermia (MH). Not only for her family, but for the national community, she saw the need for a patient’s support and research organization.

In 1981, in consultation with Dr. Henry Rosenberg, then of Hahnemann University Hospital in Philadelphia, she founded the Malignant Hyperthermia Association of the United States (MHAUS https://www.mhaus.org. MHAUS has helped thousands of families in understanding the syndrome and making good medical decisions with respect to MH susceptibility in their genetic makeup. She even appeared on the Phil Donahue Show in the mid 1-980s to promote awareness of MH.

Suellen was a natural-born leader and organizer. Moving to Omaha with her husband, she handed the reins of MHAUS to others, and took leadership of the Omaha Literacy Council. With little background in the field, she gave new spirit to its mission and benevolence to the Omaha community it served.

She was also a joiner, quickly popular with her many friends wherever she moved - Northern Virginia, Connecticut, Omaha, Evanston, Ill., and Rehoboth Beach. She was president of her local chapter of PEO, captain of her tennis team, and enthusiastic participant in her Mah Jongg and bridge groups.

Suellen was first married to Howard Vincent from 1967-72, bearing two sons, now grown, Scott and Greg Vincent. In 1976, she married Robert E. Gallamore, who brought to their union her stepsons Christopher and Benjamin Gallamore, who Sue loved as her own. It was a loving and exciting new family that she nourished to maturity, and now, sadly, leaves behind.

Sue was preceded in death by her parents, baby brother Paul, who died in infancy of SIDS, and a younger brother, David, a professor of history at East Carolina University. She is survived in addition to her husband of 45 years, Robert, by the four boys and three daughters-in-law - Amy [Christopher], Elizabeth [Scott], and Laurie [Benjamin], and 13 grandchildren - Katie, Bridget, Erin, Meghan, Benjamin, and Beth (Chris), Cole, Harrison, and Will (Scott), and Samuel, Jacob, Luke and Bryce (Benjamin).

A memorial service will be announced later in the spring.  Arrangements have been entrusted to Parsell Funeral Homes and Crematorium, Atkins-Lodge Chapel, Lewes.

For those wishing to make a gift or memorial, the family suggests donations be made in her name to the Malignant Hyperthermia Association of the US at https://my.mhaus.org/donations or the Pulmonary Fibrosis Foundation at https://www.pulmonaryfibrosis.org/donate.

“Sunrise, sunset, swiftly fly the years.” It matters less how long one lives than how well. Suellen’s spirit lives on in the memory of everyone who knew her. Everyone who knew Sue loved her, and knew that she loved them back.

This was copied from Cape Gazzette - 2021