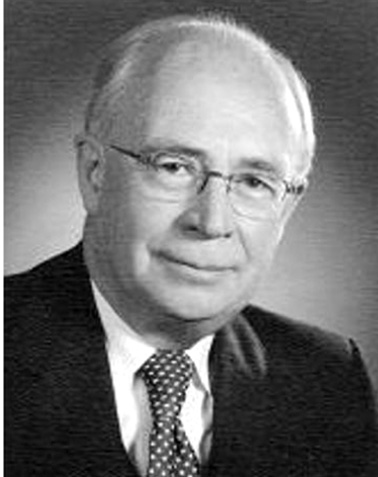 Roderick Angus Gordon has been described as a “Renaissance Man” for his varied contributions and organizational skills that furthered the study of anesthesia in Canada. Born in 1911 in Watrous, Saskatchewan, Canada, he started violin lessons at age six, playing in local concerts throughout his early school years.  At age 16 he was awarded a scholarship to the Toronto Conservatory of Music, subsequently joining the faculty, teaching violin and playing in string quartets. Gordon’s dream of continuing as a concert violinist was shattered by the Depression, and he entered medicine purely for financial reasons. He returned to Saskatchewan, graduating from the local university in 1934 and continuing at the University of Toronto (UT), where he received his MD degree in 1937. There were no openings in surgery, his choice of study, but an appointment in anesthesiology was available: a reluctant start to a career marked by his profound dedication to the specialty. Following a three-year internship at Toronto General, Dr. Gordon was commissioned in the Royal Canadian Army Medical Corps in 1939.  Sent to London, he furthered his learning by observing British anesthetists in a variety of medical centers.  Then as casualties of the war mounted, Gordon, by then a Major, served as anesthetist to a team

doing plastic reconstructive surgery, especially on injuries of the face.  He also attended to civilians and was particularly interested in helping children with cleft palates. Gordon served  six years in England and, returning to Toronto, continued in the Reserve Forces, becoming Consultant in Anesthesia to the Canadian Armed Forces Medical Council, with the rank of Colonel. While at UT, Dr. Gordon was devoted to influencing others to study anesthesiology.  He developed a formal training for residents requiring a year of study and research in the Department of Pharmacology.  Recruiting staff members and increasing the department’s funding were also priorities. Dr. Gordon became interested in the attempts of Drs. Britt and Kalow of UT to examine the medical histories of malignant hyperthermia (MH) susceptible families, to determine the anesthetic agents that trigger MH crises in these families and to develop biopsy screening tests.  He joined the researchers in a symposium in which he presented the history of MH.  While there were few studies of the syndrome prior to 1966, he stated that hyperthermia as a reaction to anesthesia was first reported in 1937 by Dr. Arthur Guedel who had encountered six cases in a twenty-year period but never reported whether the patients were related.  (Guedel, AE: Inhalation Anesthesia.  New York, Macmillin, 1937). The Canadian Anesthesia Society had been founded in 1921, and Dr. Gordon served as its Secretary-Treasurer from 1946 until 1961. His interests lay in the promotion of education, the quality  and the economics of practice, including a fee-for-service arrangement.  The Canadian Anesthesia Society later established the RA Gordon Clinical

Research Award in honor of his giving a strong voice to the specialty in the medical community. In 1954 Dr. Gordon founded the Canadian Anesthetists Society Journal (now the Canadian Journal of Anesthesia) in which he served as editor until 1982 and as editor emeritus until his death in 1998. Dr. Gordon’s teaching commitments extended far beyond Canada.  He established the Canadian Anesthetists Society’s Training and Relief Fund (now the International Education Fund) in 1964 which supports anesthesia education in developing countries.  Especially interested in Nigeria, he helped develop the Department of Anesthesia at the University of Lagos. He was Chairman of the Organizing Committee of the Second World Congress of Anesthesiologists in Toronto in 1960 and Vice President of the World Federation of Societies of Anesthesiologists from 1968 to 1972. He was certified by the American Board of Anesthesiology. Fellowships included the Royal College of Physicians of Canada, Royal College of Surgeons in England and the American College of Anesthesiologists.  Honorary memberships were also conferred by the Society of Anesthetists in Great Britain and Ireland and the Association of Surgeons of West Africa. In 1939 Dr. Gordon married a nurse from Toronto General, Miss Ruth Breithaupt.  In later years, they and their children and grandchildren vacationed in a self-built home on an island in Georgian Bay, where he instilled a love of music in his family and undertook a never-ending list of carpentry projects.  At his death in 1998, Dr. Gordon was still counseling fledgling anesthetists and participating in his many endeavors related to his specialty.