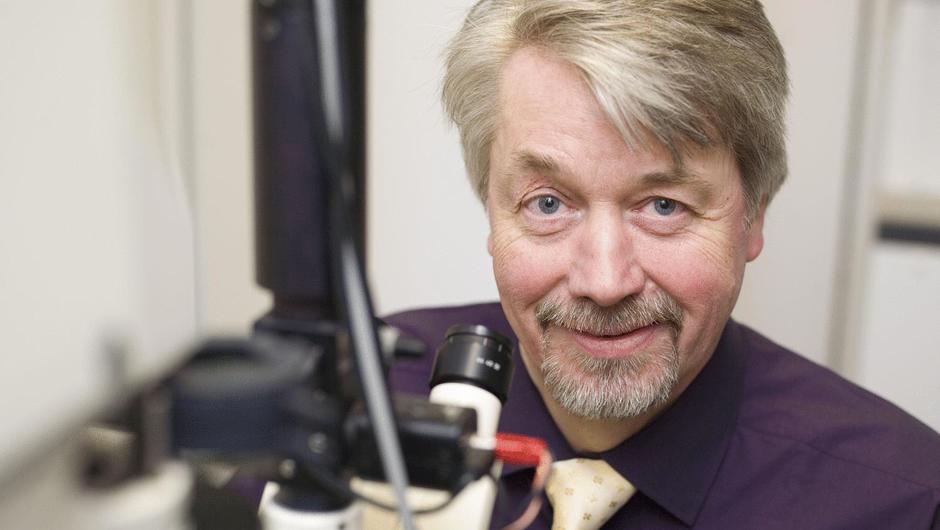 Prof. Dr. Dr. h.c. Dipl. Ing. Frank Lehmann-Horn, director of the department of applied physiology at Ulm university Germany from 1992 to 2010, passed away on May 8th, 2018 after suffering a severe disease for many years. Prof. Lehmann-Horn leaves behind his wife Christa, three sons and four grand-children.

The scientist Prof. Frank Lehmann-Horn did not only investigate the opening of ion channels in cells, first and foremost he dedicated his life to create open channels for patients with rare diseases of skeletal muscle for whom no diagnosis and treatment were known in the past. Through his passionate scientific and clinical work, Lehmann-Horn opened new horizons for this group of patients. He always had an open ear for his patients and his open-mindedness for new ideas let him develop novel concepts for disease pathogenesis, diagnostic imaging, and choice of treatment. Furthermore he opened many channels for financial support of the research and established several successful co-operations and research networks around the world.

Lehmann-Horn had three professional degrees - mechanical engineer, specialist for neurology and with great enthusiasm and personal dedication specialist for physiology. Having this diversification, he was predestinated to measure and clinically interpret the miniature currents conducted by defective ion channels in tissue. Among others his mentors and later companions were the neurologists Prof. Albrecht Struppler and Prof. Kenneth Ricker as well as the physiologist Prof. Reinhardt Rüdel, director of the department of general physiology at Ulm University from 1979 to 2004. These scientists inspired Lehmann-Horn in the 1970ies as a young researcher of the technical university Munich and guided him towards the field of muscle disorders. One of Lehmann-Horn´s virtues was successful team-work and the team published the first ever functional description of an ion channel disease in human muscle [1] and in 1982 he was awarded the Duchenne-Erb-award together with Prof. Ricker and Prof. Rüdel. In 1990 Rüdel and Lehmann-Horn organized the VIIth International Congress on Neuromuscular Diseases in Munich, Germany, where the term “channelopathies” was coined.

From 1992 to 2010, Prof. Lehmann-Horn was directing professor for physiology at Ulm University, Germany. He was very skilled to form a successful team and was a respected personality with enthusiasm and a visionary leadership. At Ulm university, Frank and his team researched the field of ion channelopathies, here not only in terms of electrophysiological measurements, but also using most advanced methods of molecular genetics at that time.

By systematic description of other rare muscle disorders, the interpretation of functional aspects and discovering genetic alterations, Lehmann-Horn contributed substantially to the current understanding of physiology and pathophysiology of ion channels.  Furthermore he implemented innovative treatment options and could help some patients, who were wheelchair-bound due to their muscle disorders, to regain enough strength to walk [3].

In 2008 he was awarded Senior Professor for Neuroscience and he was funded by the independent non-profit Hertie Foundation. He headed the Division of Neurophysiology of Ulm University from 2010 to 2016, the Interdisciplinary Center for Clinical Research 1995-2002, coordinated two EU Networks for Muscle Disease 1996-2006, and founded the Center of Rare Diseases in Ulm 2010. For his work, he received numerous awards, e.g. the Science Award of the city of Ulm 1995 and the Gaetano Conte Award 2004. In 2003, he received an honorary doctorate from Debrecen University for his achievements and was initiated into the Heidelberg Academy of Science in 2009. In 2016 Lehmann-Horn was awarded “honorary member” of the European Malignant Hyperthermia Group (emhg.org).

Thanks to the life-time achievement of Lehmann-Horn, channelopathies are now found in every medical textbook and many patients benefit from his findings. Representative for his many scholars, collaborators, colleagues and everybody else, who valued his “open channels”, we bow to Prof. Dr. Dr. h.c. Dipl. Ing. Frank Lehmann-Horn.