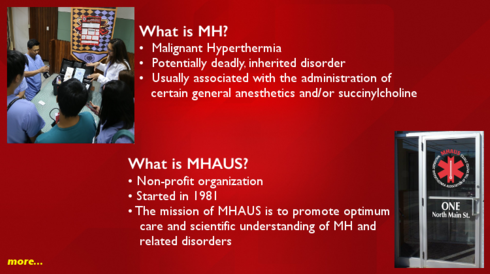 Whenever I can, I try to attend the meeting of the European MH Group.  The group consists of many scientists and physicians who are actively investigating malignant hyperthermia and Central Core Disease and their relation to other muscle diseases. This year the meeting was held in the beautiful and charming University town of Lund, Sweden, just south of Malmo which is connected to Copenhagen by a new and extremely long bridge, called the Oresund Bridge.

The 50 or so participants came from many European countries, Brazil, Australia, New Zealand, the US and Canada. Joining me from the US were Drs. Barbara Brandom our Director of the North American Registry and Dr. Mary Theroux (a hotline consultant) and her colleague Dr. Divya Dixit from DuPont Children’s Hospital in Delaware, MD.

In some years attendees also came from the former Soviet Republic and Asia, but not this year.  The meeting was hosted by Dr. Gunilla Islander a founding member of the EMHG and Klaus Glans from Denmark.  Matter of fact this meeting celebrated the 25th year of the founding of the EMHG and the founding members were present: Richard Ellis, from Leeds, Helle Ording formerly from Cophenhagen, Roger Fletcher from the UK, and Gunilla Islander from Lund.  European hospitality was definitely in order and greatly appreciated.

It was nice to be among an international group of scientists and physicians committed to a better understanding of MH and related disorders in the interest of better and safer patient care.  I was impressed with many of the presentations related to the molecular genetics of MH. One of the most interesting was presented by Dr. Natasha Kraeva from Toronto.  With the collaboration of the testing centers in Toronto and Ottowa they found that screening of the full length RYR-1 gene (The gene most clearly associated with MH susceptibility) in 31 unrelated individuals who were MH susceptibles (25) or had Central Core Disease (6), mutations were found in 61% of the samples.  Seven of the eighteen mutations were new and predicted to be related to causing either MH or Central Core Disease. This finding is similar to studies done in the MH investigative units in Leipzig, Germany, Lund, Sweden and in Leeds, UK. Does this mean that that there are parts of the gene that have not been explored and will have changes that predispose to MH (e.g. the so called non-coding section of the gene, the introns)?  Or that there are other genes that can predispose to MH (we know of one other, the DHPR gene, but that can account for only a few percent of cases)?  Or might there be other genes that influence the expression of the RYR-1 gene and be causal?  Or is the biopsy test giving us false positives?  Without answers to these questions it will be difficult to increase the sensitivity of the genetic test to make it a widespread screening test.

The MH group in Cologne, Germany, headed by Dr. Frank Wappler, has been studying the effect of the drug Ecstasy on MH susceptible swine.  Ecstasy is an amphetamine like abuse drug that leads, in certain situations, such as “rave “parties, to high body temperature, acid base disturbance and muscle breakdown.  Hence might MH susceptibles be at special risk if they take this medication?  Although the MH susceptible pigs seem to develop greater physiologic abnormalities when given large quantities of the drug, the difference is more quantitative than qualitative. i.e., MH susceptibility does not seem to play a role in the response. However, what was interesting is that dantrolene (or more properly a new formulation of dantrolene called Ryanodex) reverses the MH-like signs. Therefore, there is a strong suggestion that patients who appear in the Emergency Department suffering from Ecstasy overdose should be treated with dantrolene.  How dantrolene reverses the signs of Ecstasy overdose (which is really a form of Serotonin syndrome) is not clear.

Another interesting abstract from the MH group in Leeds, UK demonstrated that, at least under certain conditions, calcium located in the extracellular space can enter the cell and aggravate the ongoing elevation of intracellular calcium that is the hallmark of MH that results from the release of calcium from the sarcoplasmic reticulum.

The group also was unable to document new DNA variants in the dihidropyridine receptor gene.

A progress report was given on the development of an MH testing center in Czechoslovakia by Dr. Stepankova. Their center has biopsied 120 individuals and identified 14 families with RYR-1 mutations.

Dr. Mariz Vainzof from the University of  Sao Paulo, Brazil representing the group interested in MH and other myopathies described findings demonstrating a high frequency of RYR1 variants in Brazilian patients with Centronuclear myopathy (CNM). CNM is a diverse group of congenital, inherited muscle diseases that share a common pathologic appearance; enlarged centrally located myonuclei surrounded by a halo of disorganized cytoplasmic organelles.

The abstract I presented examined cases reported to the MHAUS hotline since January 2006 that were likely or definitely MH according to the consultants.  Of the 27 such calls from hospitals there were two deaths, while of the 13 such calls from ambulatory centers or office surgery centers, there were three deaths, or a mortality that is about three times greater than in the hospital setting.  A few caveats, the calls may not represent all cases that occurred in such settings and there were calls that could not be classified as to whether they derived from a hospital or ambulatory setting.  Nevertheless, the findings raise concern that when MH occurs outside a hospital setting, there is a greater likelihood of a bad outcome.  While some may argue with the findings, we at MHAUS are proceeding with developing protocols to manage the care of MH when it occurs in an outpatient setting.

This is a brief overview of the meeting.  All the 50 or so participants were actively engaged in the discussions of the papers.

Finally, there were a few other interesting aspects to the program.  For non-anesthesiologists, Dr. Islander had arranged a demonstration of an actual MH case in the University’s simulator laboratory.

Dr. A. Bom, a senior scientist at Organon laboratories, a part of Schering Plough, delivered a riveting presentation on his development of a new reversal agent for certain paralyzing drugs used by anesthesiologists and intensivists.  The agent, Sugammadex, works by a novel mechanism, i.e., binding the paralyzing agent so that it becomes inactive.  The speed with which it works implies that a relatively long-acting paralyzing agent can be turned into a short-acting agent by this compound. This can effectively replace succinylcholine, one of the known triggers of MH and eliminate other unpleasant complications of succinylcholine.